This two legged member of the Love and Hope Family is leaving for India tomorrow. This trip is to assist a dear friend in his mission to help the street animals of Mumbai. He and his small group have captured, spayed/neutered and returned over 2,000 dogs as well as too many cats to count in the last several years. They also provide care for those animals who are sick or injured. It is a privilege to help and to be a part of the hope that he brings.
Posted by Love and Hope Animal Sanctuary at 11:19 AM No comments: 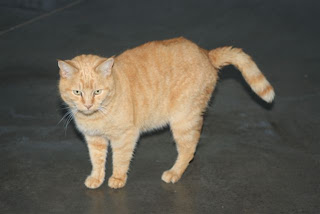 You could call Roady the Love and Hope mascot as we have come to think of him that way.
He came to the Sanctuary in October, 2005 soon after the Sanctuary opened in September. He wasn't our first cat (one day I will tell the story of the "original 15") but he came very soon thereafter.
He was found by the Town of Franklin Highway Department living outside their office. They were feeding him (he was very thin when they first found him there), but they knew that he could not remain there as winter was coming.
The Highway Department contacted us and we were happy to accept him into the Sanctuary (thus his name Roady, aka The Roadman, in recognition of the people who rescued him).
Roady was about 1 1/2 years old in 2005. He obviously had been injured at some point as his tail is broken. (you can see that in the picture). We then discovered that he had old internal injuries that could not be repaired. As a result, he "dribbles" and dosen't always make it to the litter pan. He is the most affectionate, playful, loving creature imaginable but his "problem" has rendered him unadoptable. He is showered with love by all who work at the Sanctuary and he constantly bring smiles to their faces.
Everyone loves Roady.
Posted by Love and Hope Animal Sanctuary at 5:56 PM No comments: 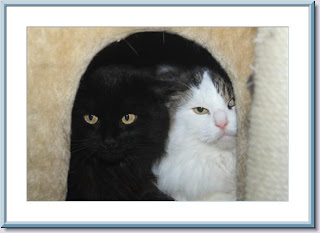 Just have to announce that Clarence has a friend, a long haired black guy named Maximilian. As you can see they became instant buddies. Clarence is is NOT alone anymore.
Posted by Love and Hope Animal Sanctuary at 5:21 PM No comments:

CLARENCE IS HERE (and he is famous)

Who is Clarence? He is a beautiful long hair white and brown cat who prefers other cats to people.
Clarence was the subject of an article “Battle in the Garden” which appeared in the New York Daily News on January 10, 2009. He and his friend, Betsy, had lived in a community garden in Prospect Heights, Brooklyn, for several years. The gardeners objected to his caretaker feeding them and decided they were to be evicted. That eviction deadline had to be postponed several times. Before a new home could be found, Betsy disappeared. It became increasingly urgent to find a permanent safe place for Clarence.
In December, Clarence arrived at the Sanctuary, thanks to the dedication of his Brooklyn caretaker. He is now safe.
He will receive the care he deserves and will have a chance to make new cat friends. When the weather permits, Clarence can bask in the sun and smell the fresh air as he lounges on one of our enclosed “catios”. (I think that he is going to like this, as it will remind him of his Brooklyn garden.)
We are pleased to be able to give Clarence his “forever” home.
Posted by Love and Hope Animal Sanctuary at 11:14 AM No comments: